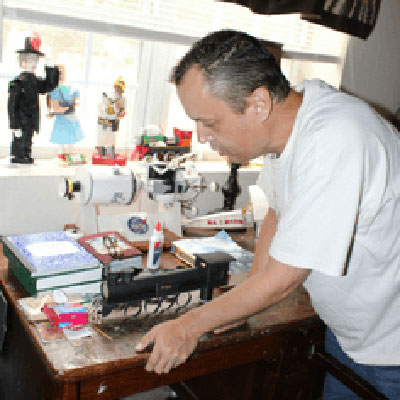 Looking at the astronaut figurine on the window sill, you would think Danny ordered it from one of the collector’s catalogs on his desk. “It’s funny that,” he said.  “I went to buy it, and they told me they didn’t have it.  I was like, oh man.  So I made it.”

That’s how many of his masterpieces are born. “I just see it, and then I build it,” he said shrugging. “I get a lot of my ideas from pictures. Sometimes in catalogs, or from books.” He points to the locomotive catalog and the partially completed steam engine on his desk. “I want to make a hundred trains. That’s one of my goals. Just because I can.” 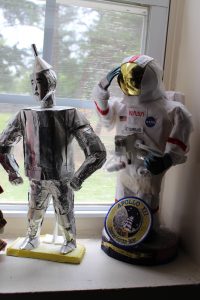 The Tin Man from Wizard of Oz and a NASA astronaut.

His masterpieces sometimes take months to complete, each one with a varying degree of complexity in design and execution. Looking at the astronaut, he grins and adds, “ I bet you some people could think that’s a collector’s item too.”

Danny’s talents developed quickly. “I might have done a few things when I was younger. Pictures for my grandparent’s fridge, you know,” he said with a smile. “But, I didn’t really get into it too much until I moved out on my own,” he said. As he walks through the rooms in his Glen Burnie apartment, signs of his creativity are everywhere.   A lifelike tin man from the Wizard of Oz sits on the window sill near a completed steam engine, and behind a very realistic NASA satellite. Framed on the walls of his bedroom are certificates from the number of art shows he’s entered.

Danny gets support from The Arc Central Chesapeake so that he can live independently. His support staff helps him get to work and art supply stores, helps him plan and cook his meals, and encourages new experiences like his newly planted garden area. Danny works every Wednesday and Friday at the NCEON Food Bank, where he’s been employed for the last two and a half years. “I just love working there,” he smiled.  “I help people pick out their food.”

Danny takes immense pride in both his professional and creative work and has set some future goals for himself.  He’s looking forward to buying a computer, putting him one step closer to his goal of selling his art. “I’d like to be able to have a business,” he said.